Helping Helen get Pants to Parliament! 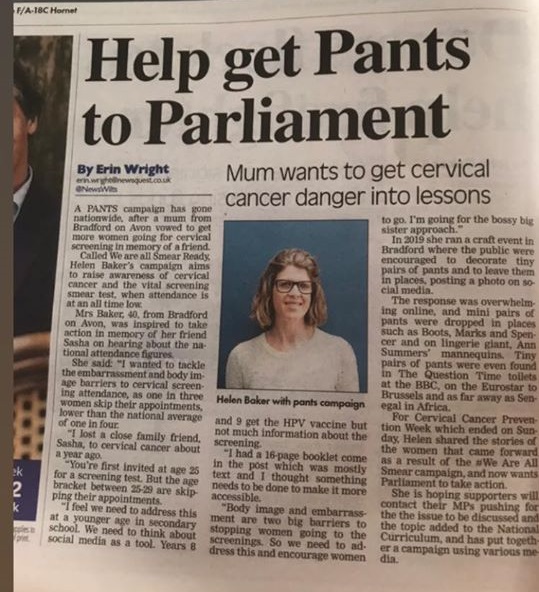 We are so delighted to have secured this coverage for We are all smear ready campaign Thanks to Wiltshire Times and BBC Radio Wiltshire for helping to spread the word about this incredibly important subject!

Local Bradford on Avon Mum, Helen Baker’s homegrown campaign ‘We are all Smear Ready’ is gathering momentum as she makes her next steps to raise awareness for cervical screening [smear test] where attendance is at an all time low. Helen lost a dear family friend to cervical cancer and on hearing the national attendance figures was inspired to take action. Helen has put together a campaign using various mediums with the intention of getting the importance of cervical screening firmly on the National Curriculum.

With a background in Primary education and also marketing and visual design, Helen has combined her skills and knowledge to create not only a media/visual campaign but is also using the gentle art of protest through ‘Craftivism’ and in 2019 ran a craftivism in BOA where the public were encouraged to decorate tiny pairs of pants and to leave them in places of note whilst posting a photo on social media.   The response was overwhelming online, and mini pairs of pants were dropped in places such as Boots, Marks and Spencer and on Lingerie giant, Ann Summers’ mannequins. A tiny pair were even found in The Question Time toilets at the BBC, The Eurostar to Brussels and as far flung as Senegal in Africa.